BlackBerry 10 is the newest version of Research in Motion’s mobile operating system. Can this new version restore RIM to their former glory? 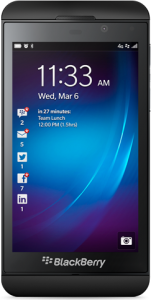 BlackBerry 10 is a new operating system. It is not an iterative upgrade to the earlier version of BlackBerry. It is a new system based off QNX. This means that none of the existing apps will work on the new system. Apps must be rewritten to work on the new BlackBerry OS. BlackBerry 10 will launch with 70,000 apps. That is very small compared to the iOS App Store and the Android Play store. To catch up RIM has added the ability to convert your Android app to run on BlackBerry 10.

BlackBerry Flow is used to describe BlackBerry’s new multitasking. Unlike other mobile operating systems that basically pause the app when it is not running apps will continue to run. You can minimize an app by simply swiping up from the bottom.

BlackBerry Peek allows you to swipe back and forth between apps. While swiping you can see both apps on the screen as you are swiping.

BlackBerry Hub is very similar to Android’s notification. But it goes beyond this. It pulls up information about a user from social networks such as LinkedIn, Facebook, and Twitter.

The updated BlackBerry keyboard is predictive. Just swipe to the right and it will insert the next word. Swipe to the left anywhere on the screen and it will delete the word. Swipe down and it changes from text to numbers. You can easily switch languages mid-sentence.

BlackBerry Remember is a single source that lets you in attach multiple things to any piece of content. You can include URLs, voice memos, notes, and more with BlackBerry Remember. It will put all of this data into a folder in the app.

The camera comes with a time shift feature. You can change the time when a person’s face was captured while keeping the rest of the picture in tact. You can then open the Picture Editor allows you to add effects with a single swipe.

The BlackBerry Story Maker allows you to splice together pictures and videos into a single story. You can even add audio to the story to go along with the pictures/videos.

Other vendors that have committed write apps for BlackBerry 10 include Skype, Amazon Kindle, Angry Birds, Whatsapp, and SAP. They already have Facebook, Twitter, Foursquare, the New York Times, Cisco WebEx, Reuters, Bloomberg, and The Economist.

BlackBerry spent a lot of time perfecting the new BlackBerry browser. They made sure that it had powerful support for HTML5. At this time it has the second best score on the HTML5test.com. That comment was not limited to mobile browsers. It has the second best score period. The only browser to get a higher score would be the browser for the mobile operating system Tizen. Tizen is a system that developed by Samsung and Intel that doesn’t presently run on any devices, though Samsung intends to launch some in the first two quarters of this year.

BlackBerry will launch with 2 different phone types. One with an onscreen keyboard and one with a full QWERTY physical keyboard. The onscreen version is called the Z10, and the physical version is the Q10. The Z10 has a larger screen than the Q10

The two BlackBerry 10 devices have a 1.5 GHz dual-core processor with 2 GB of RAM. There is 16 GB of built-in storage. There is competing information about a microSD slot. It is possible that this only exists for the Z10 model. The microSD slot adds 64 GB of storage. BlackBerry is having trouble getting out the word on specs on the Q10 version. Some of the specs listed below for are definitive for the Z10 and assumed for the Q10.

On the internet connection front it has dual-band Wi-Fi, Bluetooth 4.0, and NFC. The NFC feature will allow for mobile payments. This device supports HSPA+ and 4G LTE networks.

The BlackBerry 10 has an 8 MB rear camera, and a 2 MB front-facing camera. They are powered by a 1800 mAh battery.

This post was originally published as BlackBerry 10 for The BrandBuilder Company.