Published on 4 Nov 2014 at 11:23 pm. Comments Off on Color Contrast Effects Users.
Filed under Web Design.

Black on gray works for Batman. For the rest of us design with good color contrast so that people can read your site.

It should come as no surprise that everyone sees the world differently. Some people have great eyesight, others have poor vision. Some people are color blind. Color blindness comes in many forms. Some do not see the world in color (Monochromacy). They view the world like an old black and white television. Some see certain colors differently (Anomalous Trichromacy). Others completely lack certain colors (Dichromacy). There are three major types of color blindness in the latter category.

When designing your site you must remember these people. Check the color contrast of your text and images. Is there enough contrast between colors that these users can use your site like you intended?

Consider the following image from our Mobile Solutions page. 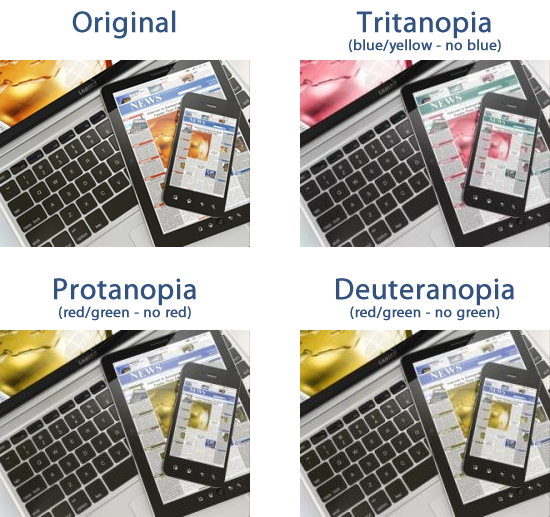 END_OF_DOCUMENT_TOKEN_TO_BE_REPLACED

Published on 28 Oct 2014 at 6:42 pm. Comments Off on Improve Indexing with RSS and XML Sitemaps.
Filed under Informative,Search Engine Optimization.

A new Google best practice guideline says that you can improve indexing with XML Sitemaps and RSS feeds.

XML Sitemaps are a topic I’ve covered a few times on this blog. A basic XML Sitemap is simply an XML file that lists most or all the pages on your website. This file resides on your website and should update itself regularly. The XML Sitemap protocol also allows you to specify the following:

XML Sitemap files are very useful for search engines. They make it very easy for them to discover pages on your site. But these files are not downloaded often since content rarely changes on most pages. For major changes to your site you can ping Google, and other search engines, telling them to re-download your XML sitemap.

Google also supports their own changes to the original XML Sitemap protocol. A Google Image Sitemap lets you add titles and captions for images found on each page. This text content helps improve indexing by simplifying the keywords associated with these photos. Video sitemaps let you include a title, description and duration along with the video.

END_OF_DOCUMENT_TOKEN_TO_BE_REPLACED

Published on 27 Oct 2014 at 7:28 pm. Comments Off on Responsive Images.
Filed under Google,Mobile,Web Design.

After years of debate Responsive Images are here. That means your site can look better and load faster.

Now that the specification for Responsive Images has settled down browsers are working hard to add support. Most browser vendors are doing this in stages.

Then we get to mobile devices (and those MacBook Pros with retina). In Apple-speak a “retina” device is one that has a pixel depth ratio of 2. You’ll load an image that is 10 pixels wide but only display an image that is 5 pixels wide. This makes things look much more clear.

Now don’t let that word “retina” confuse you. That is just a marketing thing by Apple. This calculation is an industry standard which you can easily calculate as we’ve covered before. 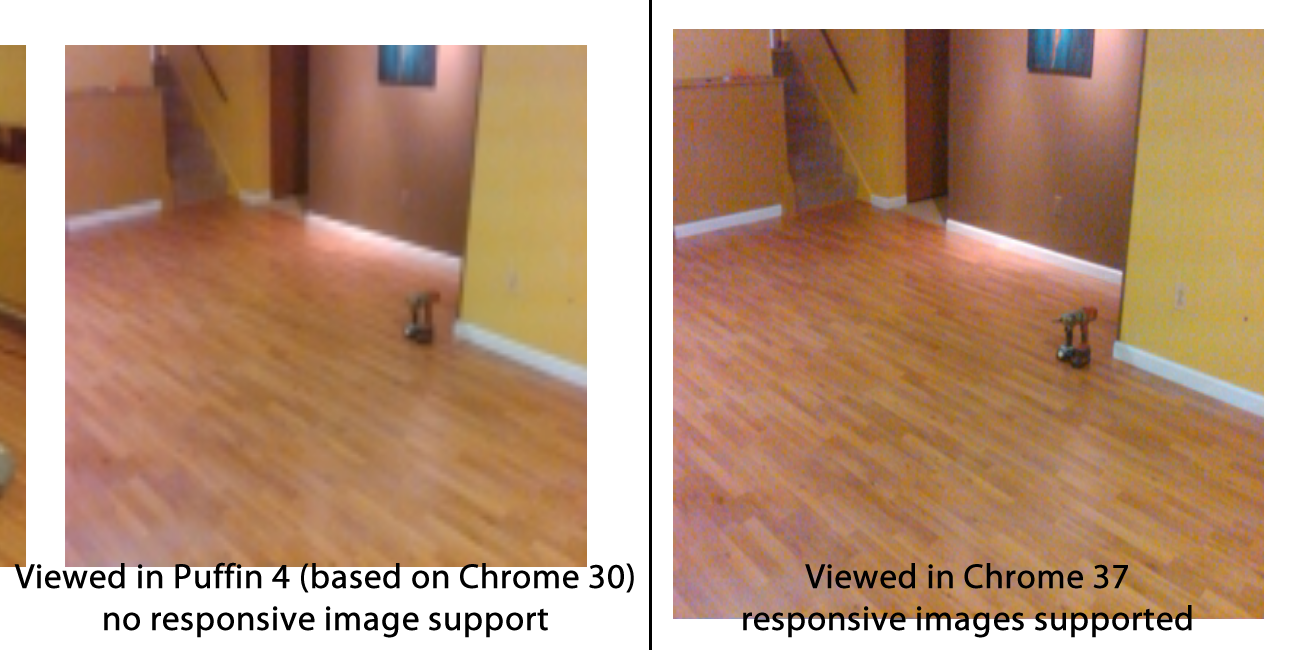 Thumbnail image zoomed in on the Samsung Galaxy S5 in the Puffin 4 (left) and the Chrome 37 (right) web browsers. Puffin 4 does not support responsive images while Chrome 37 does.

END_OF_DOCUMENT_TOKEN_TO_BE_REPLACED

As the event started Tim Cook reiterated the events from last month. He raved about the success of the iPhone 6 and the iPhone 6 Plus. He then announced that Apple Pay goes live on Monday. From there was talk of the Apple Watch that is coming in Early 2015.

From there they moved on to iOS 8. Apple showed that 96% of users are running iOS 7 or 8, while only 25% of Android users were running Kit Kat — Android 4.4. They did not have stats on users running Android Service — the APIs that power most Android features, which run on far older versions than just the latest one. They then highlighted features like the custom keyboards that came in iOS 8, and then announced that iOS 8.1 was coming Monday and brings back the Camera Roll plus many new features.

They then moved on to OS X Yosemite. Safari in Yosemite will have a new design and will run incredibly faster. These changes improve battery life by 2 hour, and improved support for Netflix. They then showed off the new continuity features between Yosemite and iOS 8. They did this with a surprisingly humorous phone call to Stephen Colbert.

Windows 10 is coming and it looks to fix some of the grievances with Windows 8 (especially the desktop).

Oddly enough, this event was kept very small. There was no live stream. The Verge was the only reporter covering the event. If you ask me that doesn’t sound to good for the next stage of Windows.

The event started with the usual bragging rights on the success of the brand. This one talked about the one and a half billion people using Windows today. We’ve hit the point where devices outnumber people. And people expect devices to just work. Windows is at a threshold and now it’s time for a new Windows. They don’t feel it’s right to call it Windows 9. They considered Windows One after the Xbox One, but Windows 1 already exists. So they are calling it Windows 10. I guess Windows 8.1 is considered Windows 9?

Windows 10 is one application platform. Microsoft’s most comprehensive platform ever. Windows 10 will cover tablets, desktops, smartphones, and other media players. There is a single Windows Store for all of them.

Windows 10 has a strong focus on enterprises. They urge all enterprises to begin a dialog today. That being said, Windows 10 will be compatible with all traditional management systems.

The following video is an introduction to the Windows 10. The intro explains that developers are the only ones that should use it now. For the average user I would suggest skipping to 1:33.

END_OF_DOCUMENT_TOKEN_TO_BE_REPLACED

Published on 17 Sep 2014 at 9:37 pm. Comments Off on Why You Need A Website.
Filed under Marketing,Search Engine Optimization,Social Media.

Your small business cannot and should not get by on social media alone. We have 5 reasons why you still need a website.

5 Reasons You Need a Website For Your Small Business 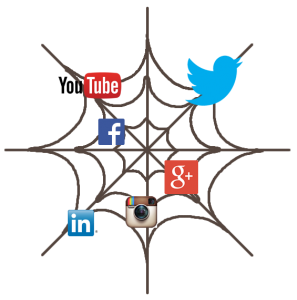 Without a website it’s hard for consumers to connect with your brand.

Consumers want to know that your business is in it for the long haul. The more resources used to build your brand furthers legitimacy in the eyes of consumers. If customers see that your online presence only exists through free services like social media then they will wonder what is going on. They will question if you’re going to be around in the future.

When consumers see your website in search results they know that they are connecting with your business. Anyone can start a Facebook page. Consumers can’t be certain if that page is really connected with your business. Additionally, having your site’s search results come up in addition to your Facebook page means that consumers have multiple ways to connect with you — and less for your competition. If you want consumers to easily find you then you need a website. END_OF_DOCUMENT_TOKEN_TO_BE_REPLACED

Responsive design is the core of the mobile-first philosophy. Responsive design places focus on the browser. With it you design your site with fluid grids that grow or expand as the screen size changes. It may result in content being hidden away from users browsing at certain screen sizes. If a website changes its look as you resize the browser and looks like your phone when you get small enough then the site uses using responsive design.

Responsive design results in one version of your website controlled entirely by the same front-end technologies used to build any modern website — HTML, CSS, and JavaScript. Any web design company can create a polished website using responsive design. These websites are easily indexed by search engines and will work just fine in new devices.

Adaptive design takes another approach to mobile traffic. Adaptive design places focus on the user and not the browser. It encourages you to create a user experience focused on the person and their current needs. For example, you may present a mobile user with a click-to-call button, or a print button for a desktop user. You can still have fluid grids like with responsive design. You just may not need those grids all the time — like when using a desktop. END_OF_DOCUMENT_TOKEN_TO_BE_REPLACED 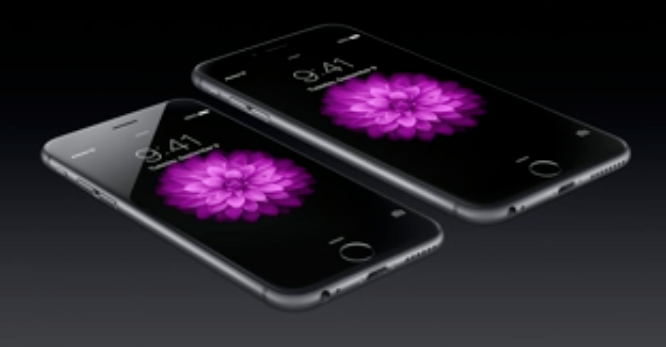 Both versions sport the new A8 chip which is 25% faster and 50% more energy-efficient. This chip does support 64-bit. They also support a new FaceTime HD camera with f/2.2 aperture to allow in more light. This camera boasts DSLR-like camera features. Networking wise the both support voice over LTE. END_OF_DOCUMENT_TOKEN_TO_BE_REPLACED

Published on 7 Sep 2014 at 8:33 pm. Comments Off on Mobile App Splitting.
Filed under Google,Mobile.