There are Google+ updates that are rolling out in the coming days. These updates enhance what you can do with photos and videos in Google+.

Once the event got started Google announced usage statistics for Google+. There are 540 million “active” users each month. An active user in Google’s eyes is someone who logs in to the service — including through Gmail. There are only 300 million users that load the Google+ stream. If you ask me that’s the true active user count.

Google+ Hangouts is the name for Google+’s group/video chat feature. It already was the best video service on the major social networks. Today’s updates make them even better.

The first major update deals with video quality. Google+ Hangouts now support full screen HD on all devices. Google can’t do anything about your friend using their 8-year-old webcam, but they can now present the best possible picture to those on modern hardware. 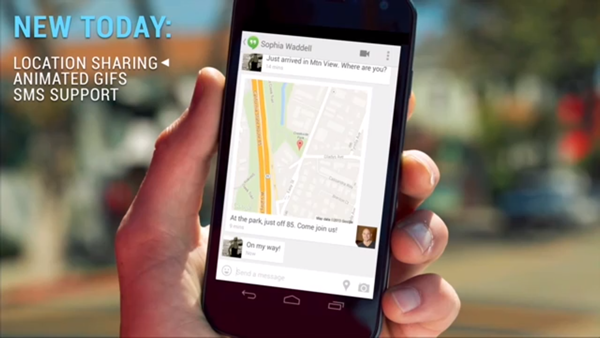 Additional features for Hangouts include support for SMS support, automatic back-lighting on poorly lit videos, and animated GIFs. The SMS support is means that mobile users no longer need to switch out of the Hangout to send or receive texts with the people in the Hangout. The animated GIFs feature behaves just like you would expect.

I know this is a very small thing, but I was disappointed with the presenter (Vic Gundotra) mispronouncing GIF when talking about animated GIFs. The ‘g’ is pronounced like the ‘g’ in giraffe. It’s a mispronunciation to simply leave out the ‘t’ in ‘gift’.

Google+ Updates to Photos and Videos

Google recognizes that Google+ on iOS is slightly inferior to Android. The iOS app is receiving an update that will add full size backups and uploads in the background. This brings them more in-line with Android users.

We all know that Google is awesome at search. Especially with image search. Google is adding 1000 more words to Google’s Deep Learning algorithm that lets you search your images for say, hedgehog, and have it display the right images. Including images with no tagging.

The Google+ Auto Enhance feature now has a low and a high setting. The high setting is what Google+ users already use. The low setting is a middle ground between the original and the image that Google thinks is best.

Google+ Auto Awesome is now even more awesome. Google+ users already love the automatically created animated GIFs Google creates when you upload a series of similar images. Auto Awesome can now take it the other way and create a single photo with the merged content. If the images overlap Google will create a ghost effect on the all but the last image.

Auto Awesome Movie is a new feature that automatically combines photos and videos and assigns them to a soundtrack. This feature is the only feature introduced today that requires Android 4.3. You can edit this movie after Google has worked its magic.

Google+ Updates After the Event

Though they did not talk about it during the event, there was one more critical update rolled out today. Google+ finally supports Custom URLs. Custom URLs are available for users and pages. The requirements for a custom URL are:

This post was originally published as Google+ Updates 2013 for Brand Builder Websites.