The long-rumored Amazon Fire Phone is official. So what can it do and what else have they announced?

Amazon has finally come out with a phone. Like the Kindle Fire this phone runs a customized version of the Android operating system. So will this phone succeed or will it fail like the Facebook phone? 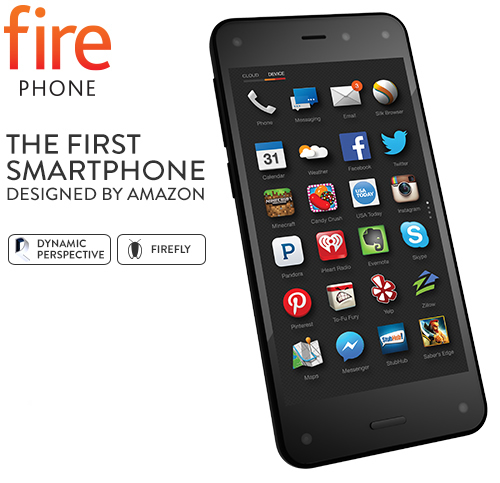 Quality wise, this is a decent phone. It has a 4.7″ screen running a 1280 x 720 resolution. This makes it about 315 ppi. This means it packs slightly less pixels than an iPhone 5S, or about 100 pixels less than most high-end Android phones released this year.

The Fire Phone uses four dynamic perspective cameras in each corner on the front. These low powered sensors allow the phone to create a software driven 3D perspective that is very useful when you tilt or rotate the phone. This is actually pretty neat, but we’ve seen 3D in smartphones before. It was neat then, but I didn’t see consumers clamoring for it again and thus why it has disappeared from recent smartphones.

The rear 13MP camera supports f/2.0 5-element aperture with optical image stabilization. Basically this means it lets in more light and thus can take much better photos in a low-light environment than the Galaxy S5 or iPhone 5s.

It has 2 GB of RAM and a 2.2 GHz quad-core Snapdragon 800 processor. These specs are exactly the same as the Nexus 5.

The Amazon Fire Phone comes with either 32 GB or 64 GB of storage. There is no microSD card slot. This makes sense given how much Amazon is pushing their cloud storage business.

Connection wise it supports Wi-Fi, 4G LTE, NFC, and Bluetooth 3.0. Unfortunately it does not support Bluetooth 4.0 like in most recently released smartphones. Basically this just means that it will eat your battery a little more than most other smart phones you could get this year.

The Fire Phone has an 2400 mAh battery. This gives it 285 hours of standby idle time. It has 22 hours of talk time, 11 hours of video playback, and 65 hours of audio playback.

There is a dedicated button on the side that brings up the Firefly feature.

The feature gaining the most attention is the new Firefly feature. Basically it is a glorified scanner that lets you scan bar codes to help you purchase the item from Amazon’s website. It also can scan QR-codes, business cards, phone numbers, URLs, DVDs, books. While this sounds remarkable, this feature is already built-in to the Amazon apps for Android and iPhone. The Windows Phone app can scan bar codes.

If you’re a retail business you might be mad that Amazon is encouraging users to go into your store to learn things and buy it from them. I would be too. I’ve quickly looked into the Firefly SDK to see if there is anything on geofencing that might help you stop this, but so far I’ve seen nothing.

The firefly feature can recognize what movie or video you’re watching/listening to. This makes sense coming from the company that owns IMDB.

Speaking of music, it lets you purchase concert tickets from the song you’re listening to.

The map app displays Yelp reviews when you tilt the phone. The mapping data comes from Nokia’s HERE maps. I’ve said it before, but you really need to remember Nokia when conducting your local SEO efforts. The HERE maps now provides data for the Amazon flavor of Android (Fire OS), Firefox OS (no relation to Amazon’s Fire OS), and most Windows Phones.

Amazon uses Bing for the default search app. This makes a little sense since they are trying to distance themselves from Google, and are already working with Microsoft’s newly purchased Nokia for maps.

Lastly, you can browse web pages simply by tilting the phone. This is a feature that feels like something you’ve seen before, but haven’t exactly. The closest things that come to mind are Samsung’s Air Gestures, and the tilted browser display from the NetFront Life browser.

The Amazon Fire Phone costs $199 for the 32 GB model on a two-year plan from AT&T. It is $649 without a contract. This phone is exclusive to AT&T and has a July 25th release date. Of course, you can pre-order it directly from Amazon.

As an aside, as a developer, I always ignored the Amazon Appstore because I could not justify the $99 annual fee to list apps. Google charged $25 for 25 years to list apps. The $99/year fee matches the price to list in the iOS App store. Apparently Amazon has completely dropped the developer fee entirely. Amazon will still take a cut of revenue-generating apps, but that is fair.

With this announcement BlackBerry added that they are closing the music and video sections in BlackBerry World. They encourage users to head to the Amazon Appstore for that type of content.

I think that’s it for news from Amazon this week. The Amazon Fire Phone is definitely a big move for the company. As a consumer I don’t see why I would want one when I can get better for less (though if you’re an Amazon Prime subscribe this will save you a $100 so that helps). Still, it will appeal to some and I wish Amazon luck with this new endeavor.

Maybe I’m wrong here. What do you think of the Amazon Fire Phone?

This post was originally published as Amazon Fire Phone and More for Brand Builder Websites.