Apple’s WWDC 2014 has kicked off with coming changes to iOS and OS X. Here is what to expect this year.

OS X version 10.10 is named Yosemite. The new version features updated icons and menus with better transparency. The new icons are 2D, except for the trashcan. Apple spent a lot of time to create a beautiful 3D trashcan. Menus now have a dark mode.

Apple then introduced an upgraded version of Spotlight. Spotlight is trying to copy Google Now as a native Apple application.

Airdrop works between iOS and Mac.

Apple then boasted about how fast JavaScript runs in Safari. Their own benchmarks claim that it is faster than Chrome or Firefox. Speaking of fast, they announced that SPDY is finally coming to Safari. Safari is also getting WebGL support, and hardware accelerated 3D graphics. I know Apple would hate me saying this, but this is them making Safari catch-up to modern IE.

Apple has introduced something they call Continuity. Continuity allows you to share things between all of your Apple devices. A phone call coming in on your iPhone will now display the caller ID information on your Yosemite laptop. 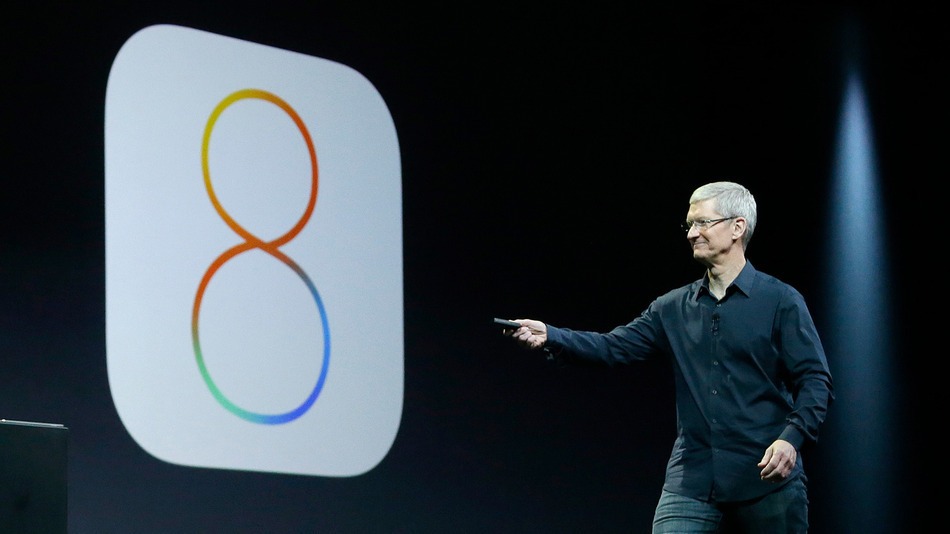 The notification center now allows you to reply without leaving your app. You can now reply to many of these notifications from the lock screen.

The keyboard app is finally getting predictive text that is context sensitive.

Apple recognizes that health apps are very important to mobile users. Most mobile users have some type of health related app. Apple has created an app called Health powered on the back-end by HealthKit. Health apps will use this back-end to get access to health-related data. It is not clear if data recorded in one app is available to another app.

A new feature in iOS 8 is family sharing. You can now get to everything anyone in your family has purchased.

The photo app will now automatically straighten pictures. The photo-app now has in-app photo editing that automatically shows up on your other devices.

Siri is getting a major upgrade. In your car you can use Siri by saying “Hey, Siri”. This is basically the same as “Hi, Galaxy” in the car mode on Samsung devices. Siri is also getting song identification support with Shazam.

iOS 8 drops support for iPhone 4. Given the weaker hardware this makes sense. iOS 8 is still supported on iPad 2.

The App store is getting new features that make it easier for users to find the app they are looking for. Some of these new features include:

Apple also introduced a programming language for developers called Swift. They basically called it Objective-C without the C. It boasts even greater speeds for certain numerical calculations than Objective-C has over Python.

That is all of the major highlights from WWDC 2014. What are you most excited about?

This post was originally published as Apple WWDC 2014 for Brand Builder Websites.