« 2013 Predictions Results from Brand Builder WebsitesFacebook Ads are a Must »

Each year the Consumer Electronics Show showcases the very best upcoming tech products. Here are some of the CES 2014 highlights.

CES 2014 Highlight: Android in Your Car

Google has joined forces with Audi, GM, Honda, Hyundai, and Nvidia to form the Open Automotive Alliance (OAA). The purpose is to create a common platform to help drive innovation and create safer, intuitive interfaces. Presently all manufacturers were working on their own proprietary systems. By moving to an Android-based system manufacturers are standardizing on the mobile OS with the most active users world-wide. This maximizes their ability to delivery a “driver-optimized” experience for consumers who already bring Android into their car.

The major technical hurdle to this alliance is that consumers do not upgrade their car (or dashboard) anywhere near as often as they upgrade their mobile devices. This is why Nvidia is a part of the OAA. The hope is that they can offer hardware powerful enough to last for many years.

The war for control of TV is heating up. The new competitors to enter the fight have turned to the emerging mobile operating systems. These mobile OS tout the power of HTML5 apps. Can they live up to the hype of native apps? Only time will tell.

Having purchased webOS in 2013, LG has revealed that webOS will power over 70% of their smart TVs. As the sole owner of webOS, LG has total control over the experience delivered to the user. Smart TVs powered by webOS will support voice and gesture-based controls as shown at CES 2014. The webOS app store already has many apps that you would suspect for a Smart TV such as Hulu Plus, Netflix, and Amazon Video.

Panasonic has turned to Firefox OS for their upcoming line of Smart TVs. Unlike LG, Panasonic was not able to show off any devices at CES because of the newer nature of Firefox OS. Panasonic is unable to make claims about any apps from content providers like the ones mentioned for LG. Instead they only make claims to content from their own portal. As an owner of a Firefox OS device I can tell you that no such apps presently exist in the Firefox Marketplace. They may in the future, but that requires further development from Mozilla on their WebAPIs.

For those uninitiated, the term 4K has a few different definitions depending on the medium. They all are referring to a particular type of screen resolution. The most common of these are for movie theaters, and for consumer devices. Ultra HD is the name of the definition for consumer and it is double 1080p HD. Ultra wide is the name of the definition for movie theaters. Ultra wide has a 5136 x 2160 resolution which is a 21:9 aspect ratio.

If you’ve been to a Regal theater in the last year or so you’ve them hyping “Go Big or Go Home” to discourage viewers from downloading movies and watching them at home. The claim is that you can only get a get a quality experience with a large screen at the theater. Both Samsung and LG challenge that claim with their 105″ curved 4K TVs. They curved these devices to cut down on glare. While this helps during the day, it is a waste of space if you’re watching movies at night. That is why Samsung has also created an 85″ TV that bends. This gives you the best of both worlds. That said, the prototype displayed has people worried that the parts may break down.

To be clear, Samsung and LG are both calling their 105″ TVs Ultra HD while they both have the larger Ultra wide resolution. I’ve not heard any confirmation on what Samsung means by 4K for the bendable model. I believe they mean the Ultra wide resolution for this as well.

And for anyone that missed it, here is the video of Michael Bay falling apart at CES while trying to talk about the Samsung curved TV. 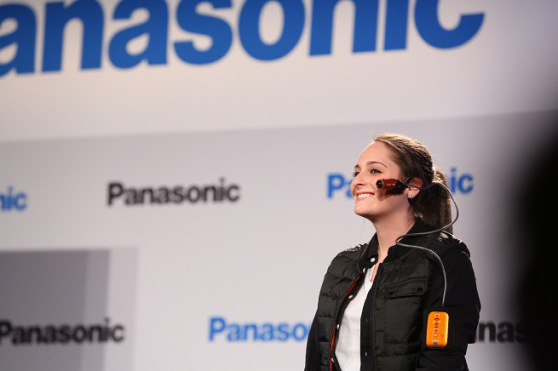 Wearable devices are all the rage at CES 2013. Some of them are hits and some of them will leave you scratching your head. The biggest head scratcher is the Panasonic 4K face camera. I have no idea why someone thought this was a good idea. Bravo for combining two CES 2014 buzzwords with one product?

The clear winner in the wearable device category for CES 2014 is the company behind the Pebble smartwatches. They had two major announcements for the event. The first I want to talk about is the new Pebble Steel smartwatch. This $249 smartwatch comes with metal and steel straps and is lighter and thinner than the model that shipped in 2013. This waterproof smartwatch is made of stainless steel and gorilla glass. It is still compatible with all previous apps and still works with Android and iOS.

Pebble’s second major announcement is the new app store. This new app store will make it easier for users to download apps and watch faces. Pebble confirmed that Pandora, and ESPN will join Yelp, and Foursquare as major vendors with apps in the new store.

There are a few things that happened at CES 2014 that are worthy mention:

That wraps it up for the CES 2014 highlights. Was there anything you thought we missed? Do any of them have you excited? Feel free to share your thoughts.

This post was originally published as CES 2014 Highlights for Brand Builder Websites.