Apple started the event by talking about their love for the desktop. They criticized “the competition” for turning PC’s into tablets and tablets into PC’s. This was a clear dig at Windows 8 and Android.

To show there love for the desktop they demoed Mavericks. Mavericks is the next version of OS X that was introduced during WWDC. The feature list is essentially the same as what they showed at WWDC.

The big news with Mavericks is the price and method of distribution. It is FREE for any version of OS X from 2007 forward. You can download this version just like downloading an app. Mavericks is available today.

The new 13″ MacBook Pro is a retina quality device. It is 0.71 inches thin and weighs 3.46 pounds. A 4th generation Intel Haswell chip powers this device that gets up to 9 hours of battery life. Pricing starts at $1,299 and is shipping today.

The 15″ MacBook Pro is even faster than the 13″ version running the Intel Crystalwell chip. This new version starts at $1,999.

There are two new versions of MacBook Air that come in 9″ and 11″ and cost $999 and $1,099. They didn’t really talk about anything else other than the price.

The new Mac Pro is a monster! It has an Intel Xeon E5 and comes in quad, 6, 8, or 12 cores. Each core has 30 MB L3 cache. The memory is all flash-based and goes up to a terabyte! It is no louder than a Mac Mini is 70% more energy-efficient. It can handle three 4K devices and a single 4K TV at one time. This device starts at $2,999 and ships in December. 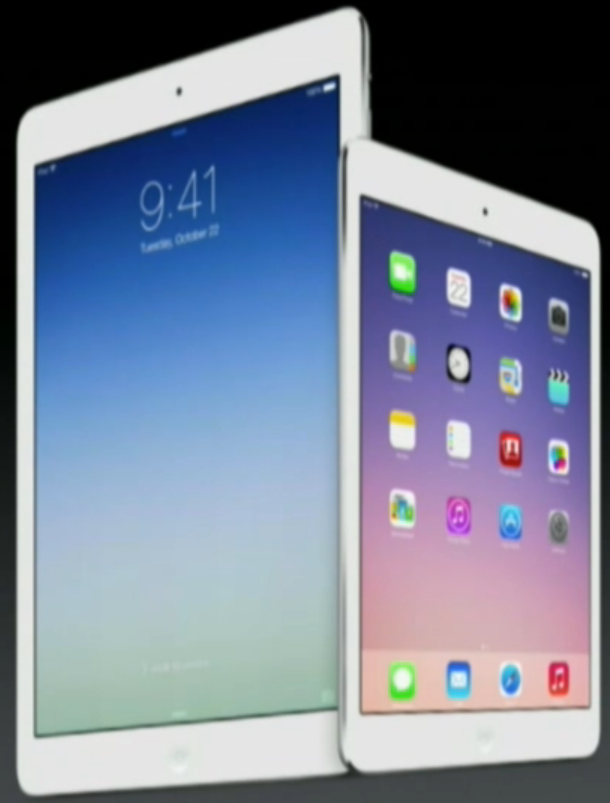 The iPad Air is the next generation iPad. If you hear anyone talking about the iPad 5 then this is what they’re talking about. The name iPad 5 was the name everyone expected for the device.

The new iPad 5 will receive the new super-fast A7 chip introduced in the iPhone 5S. Compared to the original iPad the new iPad Air has 8x the CPU performance and 72x better graphics. The WiFi speed has doubled from the iPad 4. Battery life tops out at 10 hours. There is no change to the camera.

It is now 9.7 inch in size and has now only ways 1 lbs. The iPad Air is available in black, white, and “space gray”. There is no gold version.

First let me start off by saying that I hate this name. It’s ridiculously cumbersome. Just call it the iPad Mini 2.

The Mini is now a mini version of the main iPad. The internals are the same. It has 4x the CPU performance and 8x the graphics from the earlier version. It comes in the same colors as the new iPad Air. It maintains the original iPad Mini’s 10 hour battery life.

Smart Covers and Smart Cases are available for both the iPad Mini and the iPad Mini with Retina at the same price points. The leather case is $10 cheaper than the iPad Air version.

The new iPad Mini starts at $399 or $529 for LTE support. The old iPad Mini now costs $299. There is no hard date on the iPad Mini, just that it is coming in November.

This post was originally published as iPad Event 2013 News for Brand Builder Websites.