Microsoft’s Surface Pro tablet running Windows 8 is now available. We have one and are letting you know what’s good and what’s not.

Microsoft recognizes that the world changes grown beyond the desktop. To stay relevant the next version of Windows needs mobile support. To do this Microsoft has to support the type of components found in mobile devices. Unfortunately software written for traditional desktop components cannot run on mobile devices. Developers need to rewrite this software for the mobile devices. To help keep this clear Microsoft introduced two versions of Windows. Windows RT and Windows 8.

Windows RT is the version designed for mobile devices. Microsoft developed a new style of interface codenamed “Metro” during development. The official name for these apps are “Windows Store apps”.

The Windows Store is Microsoft’s attempt to counter Apple’s App Store and Google’s Play Store. The Windows Store is the only way to install apps written for Windows RT. The only exception to this rule comes to Web browsers. Web browsers are complex, rapidly evolving software. As such, Google Chrome and Firefox are given special privileged that allow users to install them from the publisher’s website. At this time Chrome’s interface basically looks like the desktop interface. Firefox’s interface, now only in nightly builds, looks like the mobile Firefox interface.

Windows 8 is the version designed for traditional desktop components. It has better performance, better security, and lower system requirements than Windows 7. If your computer can handle Windows 7 than you can upgrade to Windows 8. Windows 8 can run any program designed for Windows 7. You do not need to use the Windows Store to install software on Windows 8.

The change that everyone notices is that the Start button in the lower left corner of every version of Windows is gone. Instead Microsoft introduced the Start screen using live tiles. These tiles are similar to the ones in Windows Phone. These tiles update themselves to deliver dynamic information such as the weather or comments on Facebook. 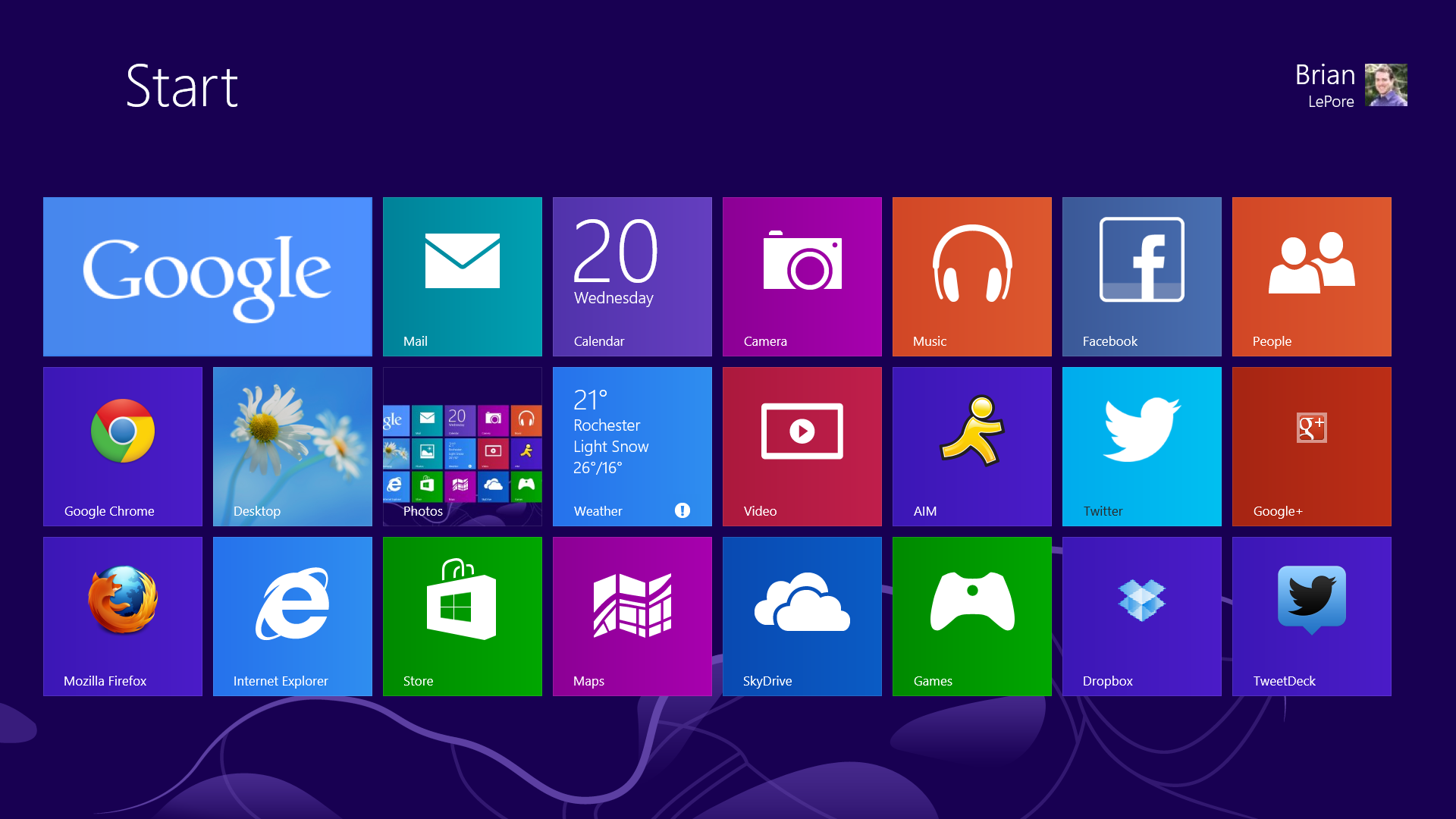 The Desktop mode is accessible from a tile on the Start Screen. This mode looks like the default desktop theme from Windows 7 (Aero Glass). The differences between Aero Glass and this theme are that programs seem flat and the removal of the transparency effect around the border of programs. They did this to improve performance and consistency with live tiles. 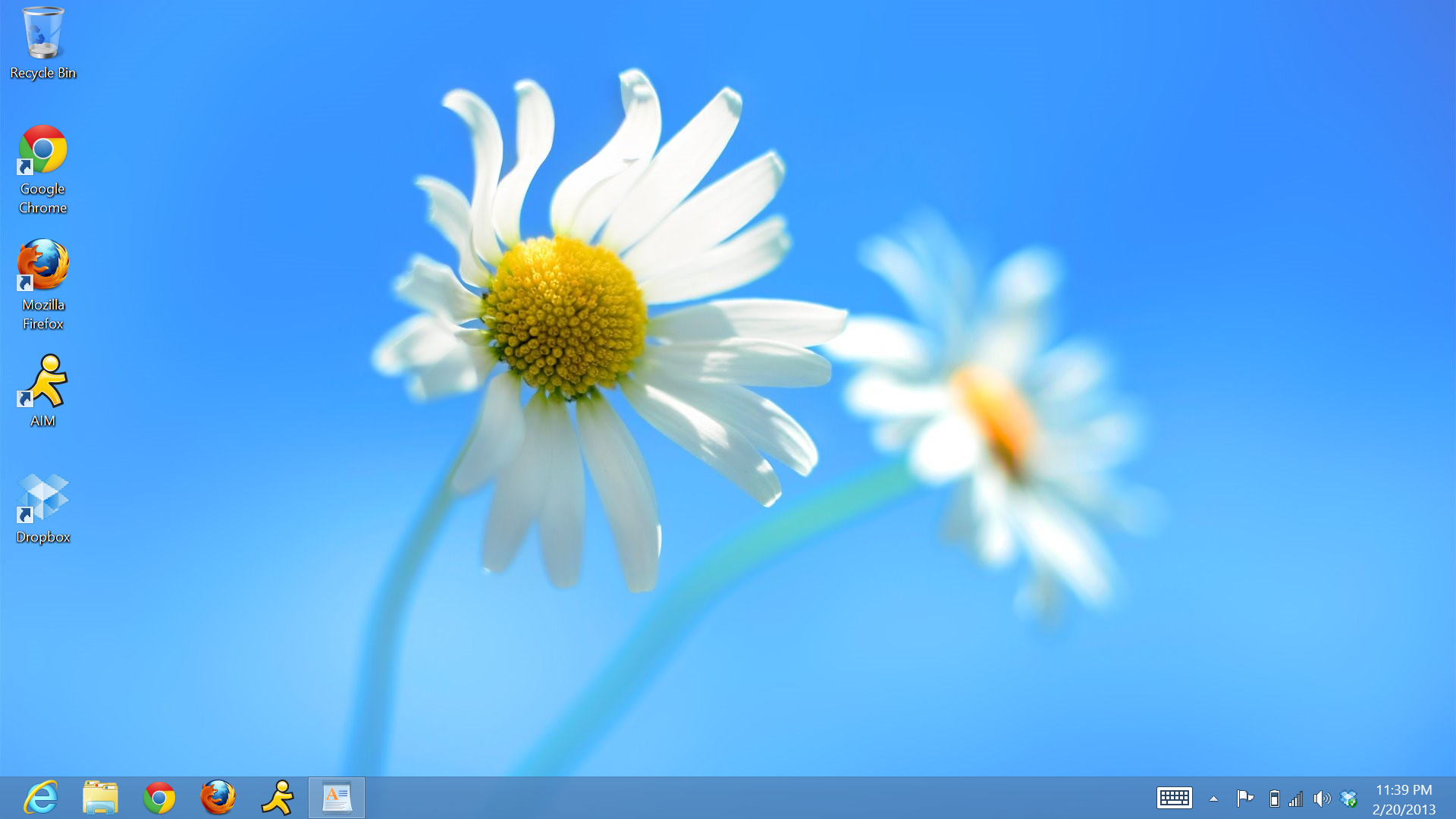 A popular phrase in the software development world is “eat your own dog food”. The idea is that a company need to show so much confidence in their product that they will use it themselves. It works as a testimonial for the product’s quality.

In order for Microsoft to create a new operating system that runs on multiple architecture Microsoft needed to create products that ran on those systems. This lead to the Surface tablets. Last October Microsoft introduced the original Surface tablet running Windows RT. Earlier this month they introduced the Surface Pro running Windows 8. Microsoft also launched two keyboards that they referred to as the Touch Cover and the Type Cover that effectively turned the tablets into a laptop. The Touch Covers are slicker and limited to the keys used by most people. The Type Cover offers the traditional assortment of keys such as esc and the function keys. 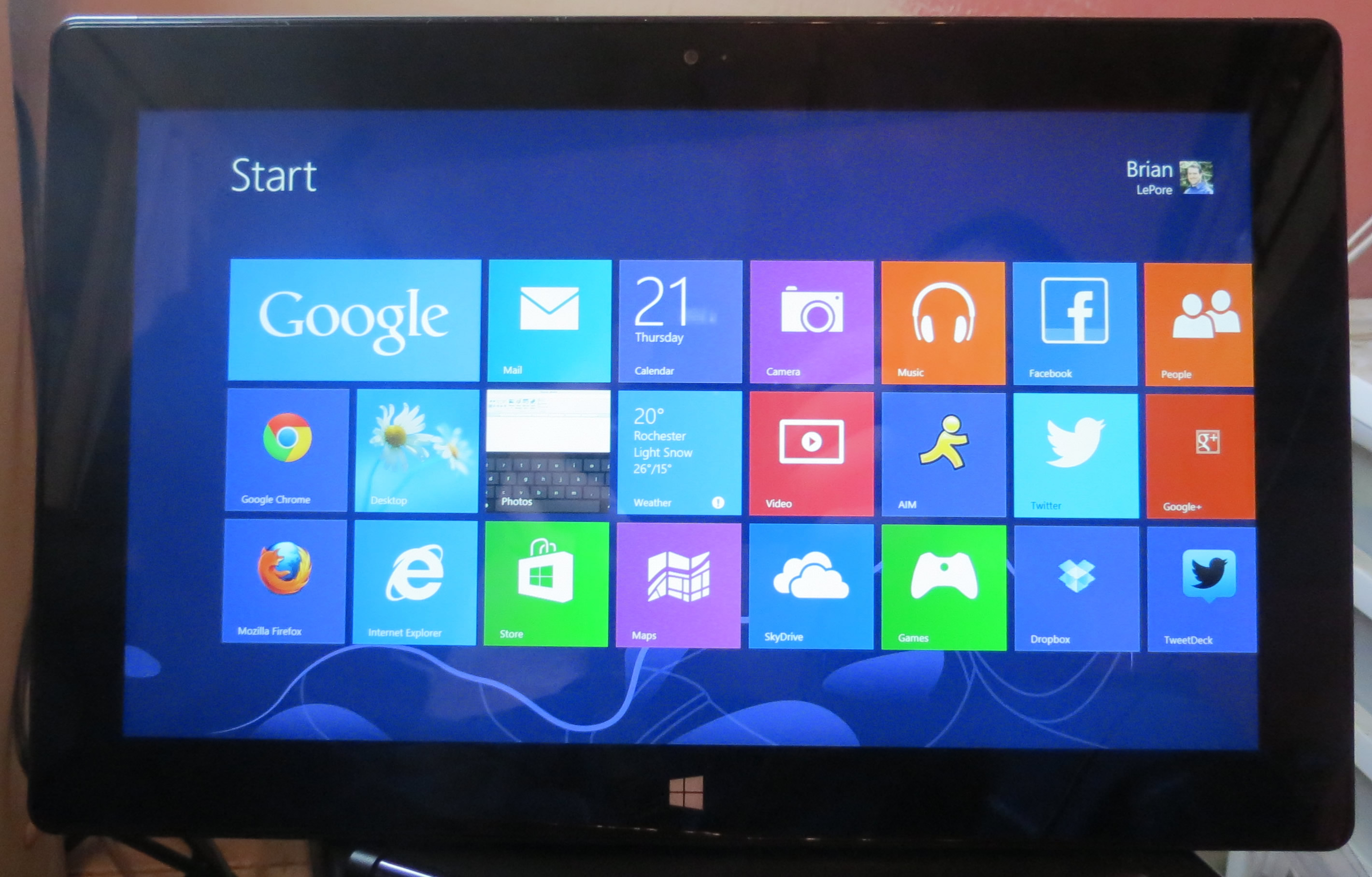 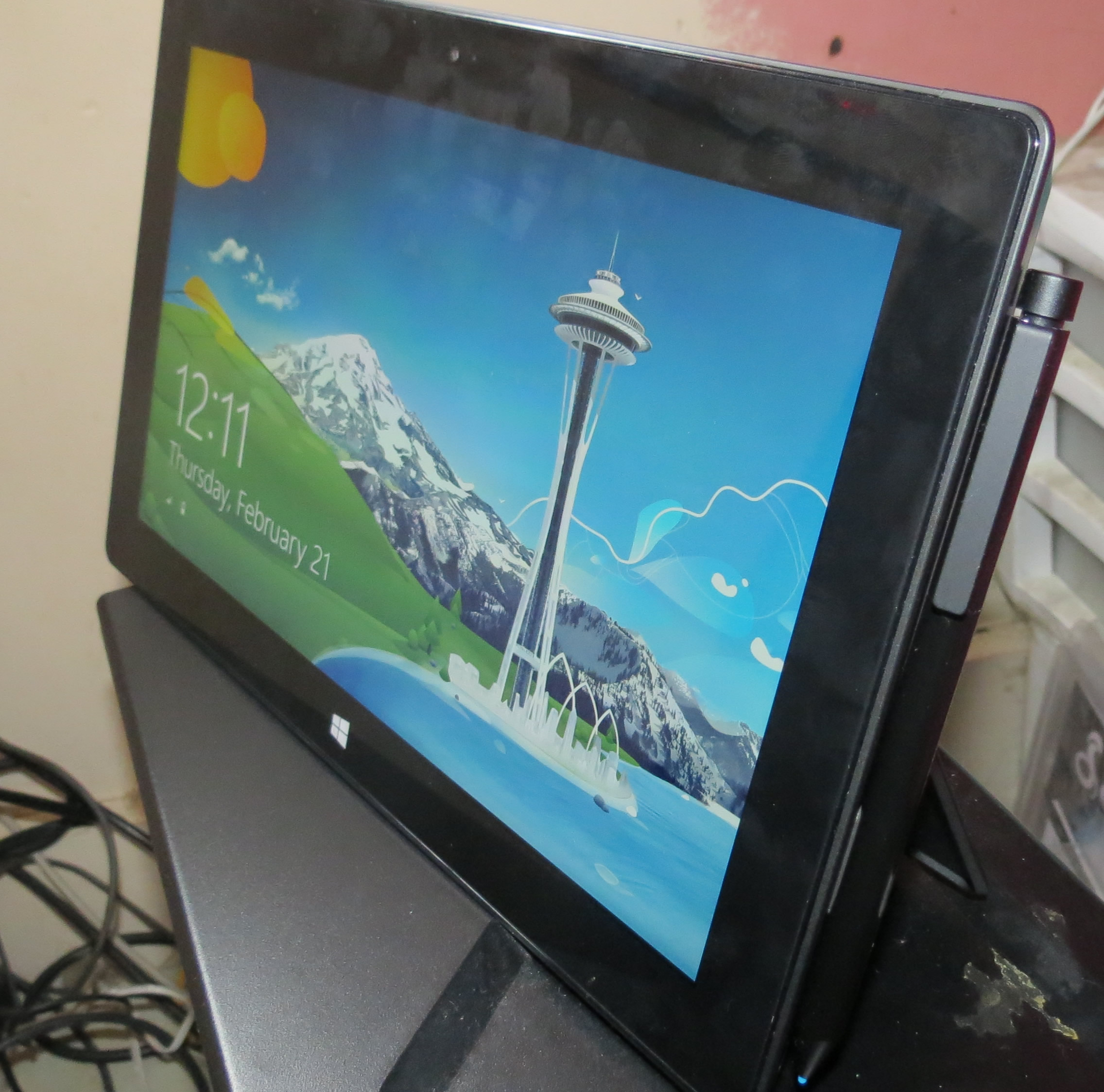 The Surface Pro’s stylus is magnetically attached to the tablet. 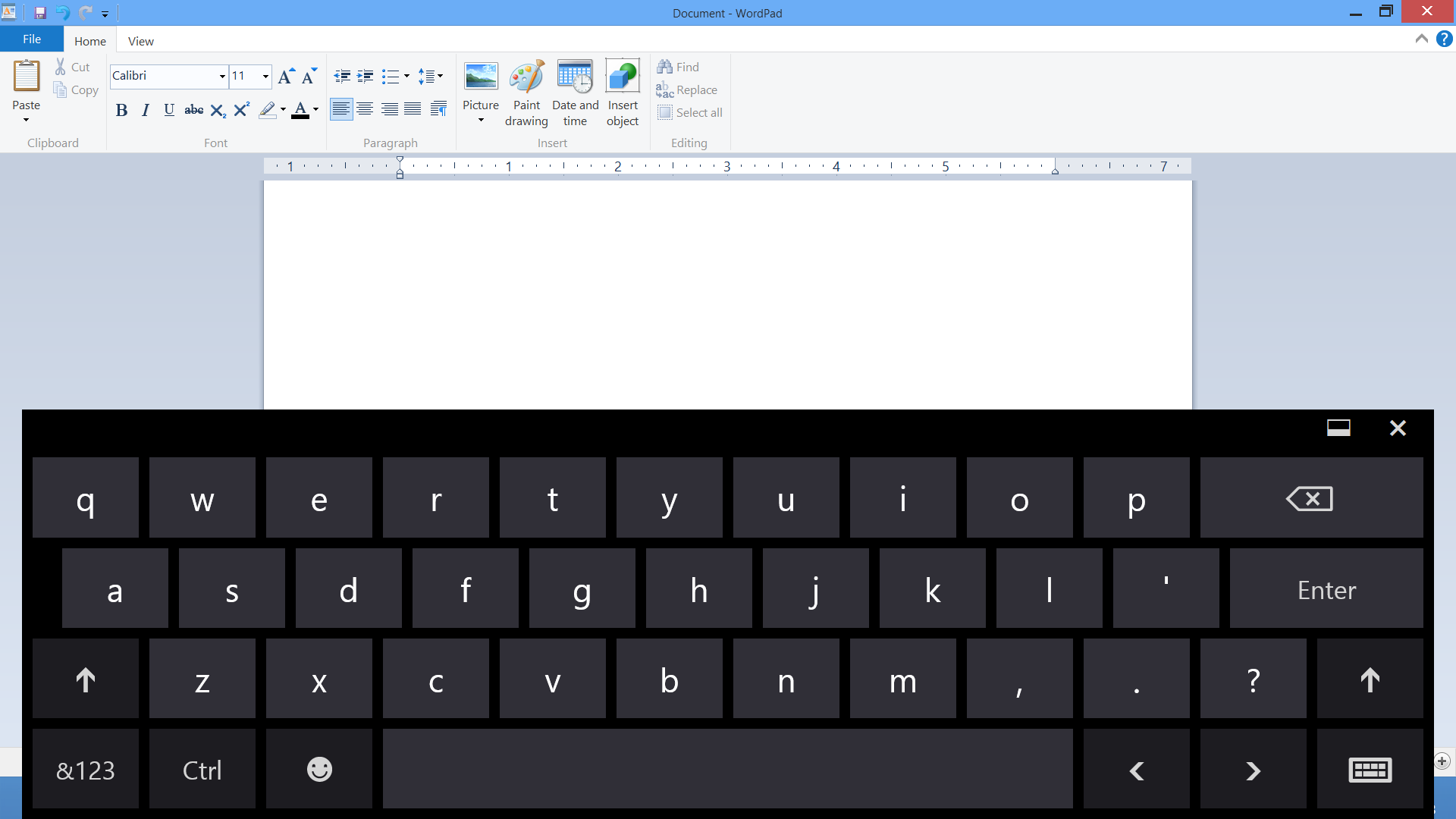 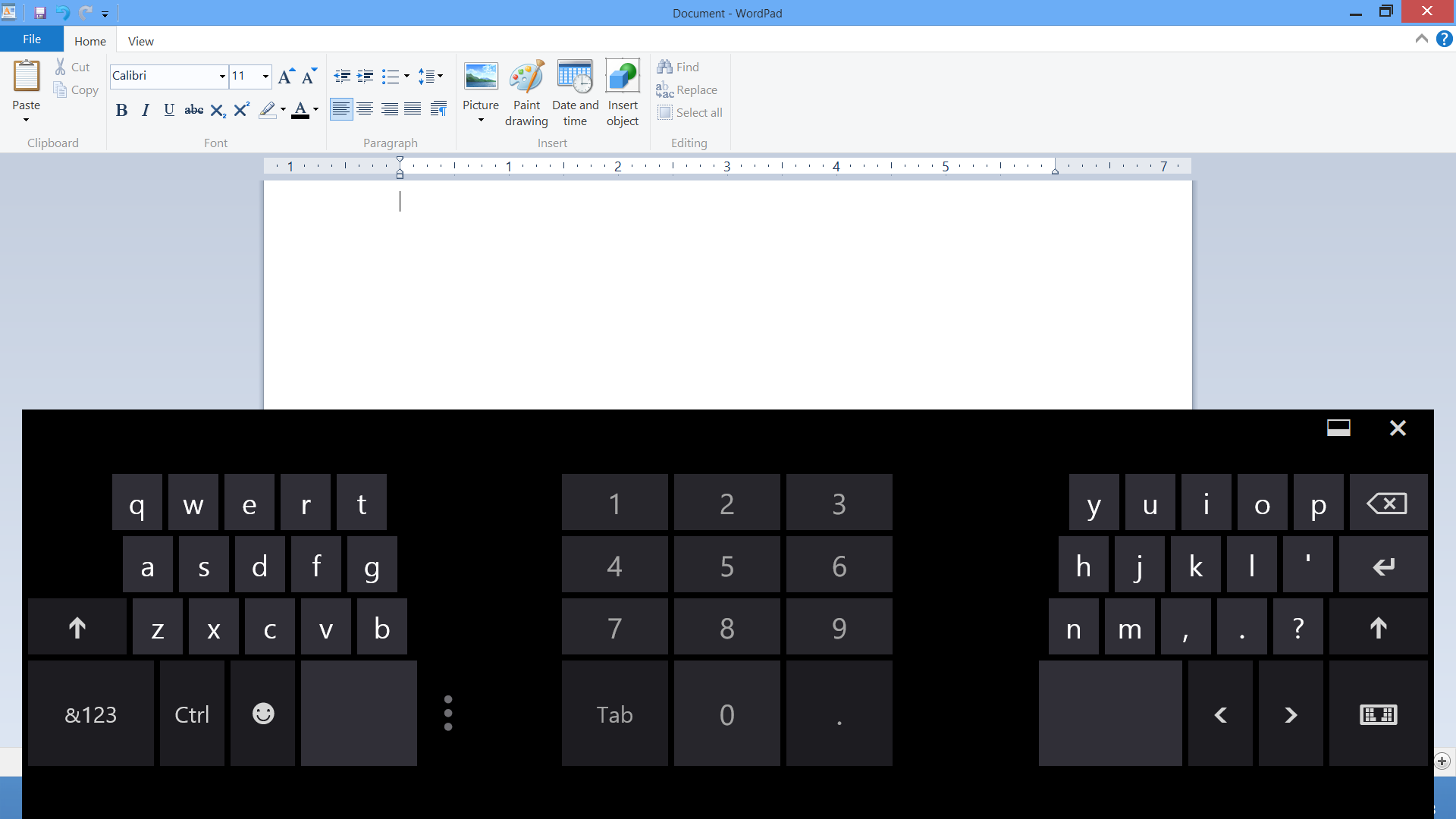 Windows 8 supports the ability to display two apps on the screen at any given time. What’s neat is that the traditional desktop is an app. This means that you can have multiple windows open on that screen, and another app on the side. 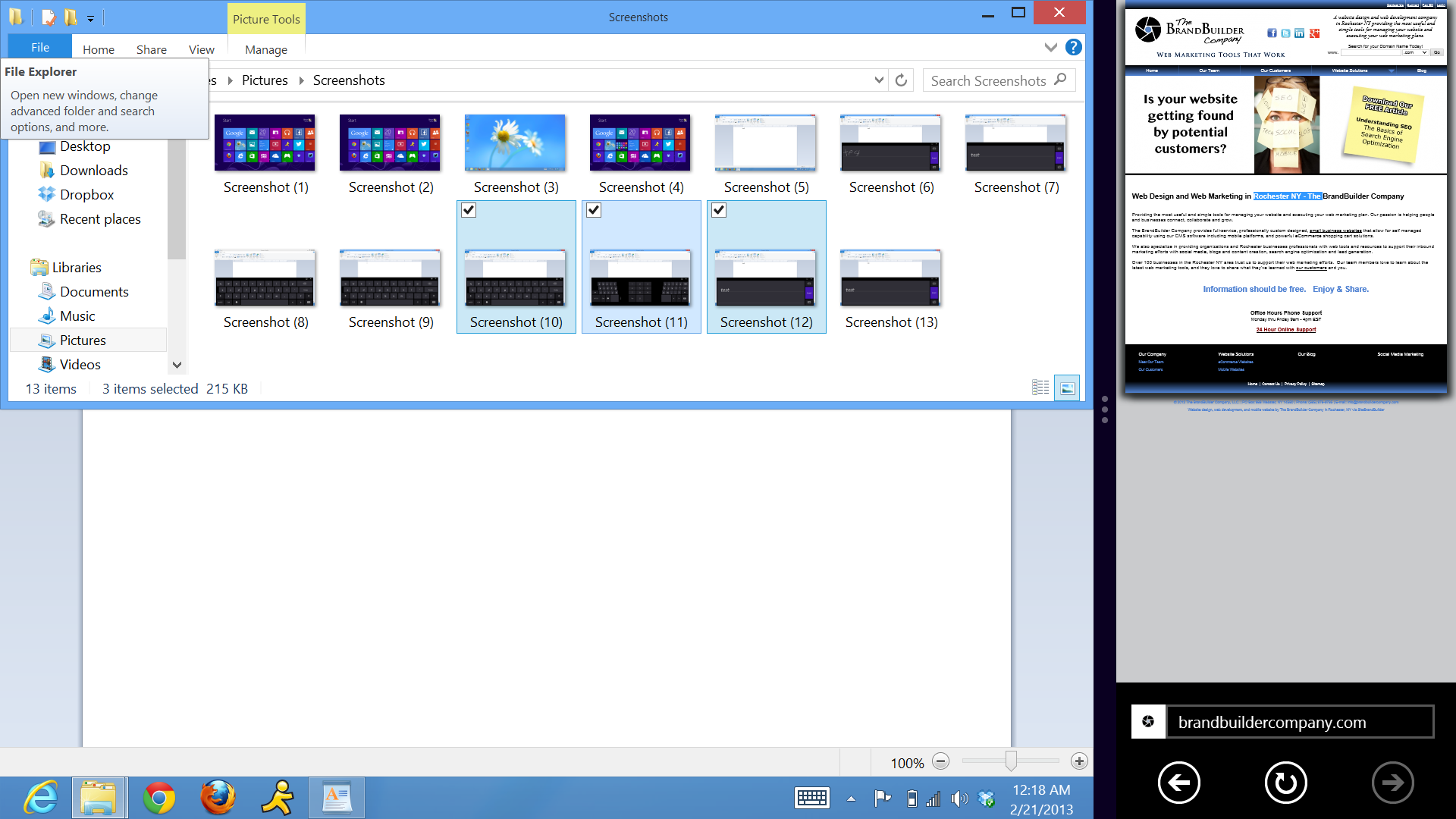 In this example the traditional desktop is an app, and Internet Explorer 10 is on the right.

Surface Pro: The Sunny Side

The Surface Pro includes a stylus that is not found with the original Surface. When not in use you can connect the stylus to the same port used for the magnetic charger. The stylus is an alternative to a virtual keyboard. It does a pretty good job at recognizing sloppy handwriting. Note: it cleans up the handwriting after you have completed a word. My handwriting is much worse than that. 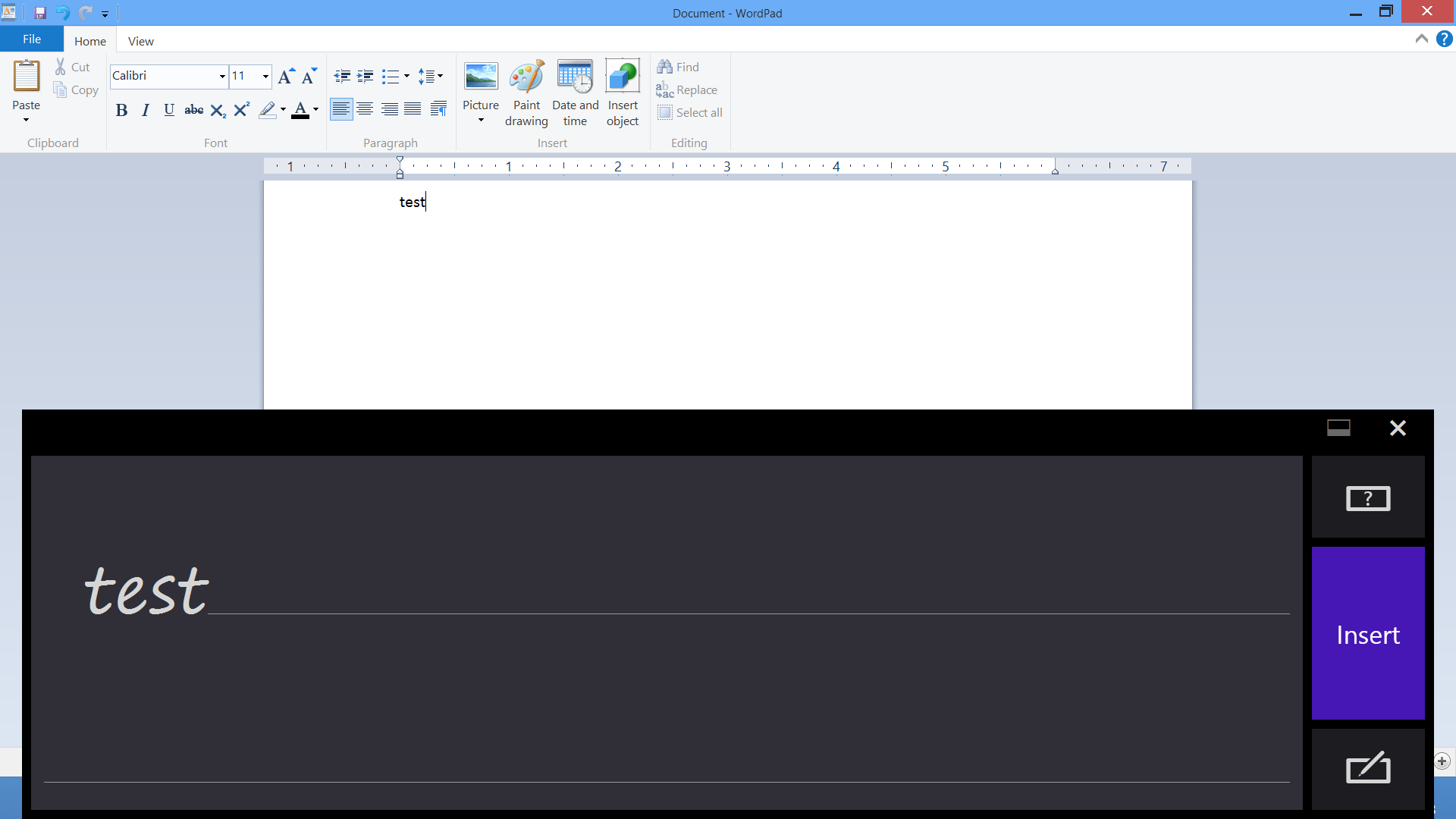 The stylus does not actually need to touch the screen for the Surface Pro to recognize the device. A tap simulates a click, but you can hover over an element like with a mouse. 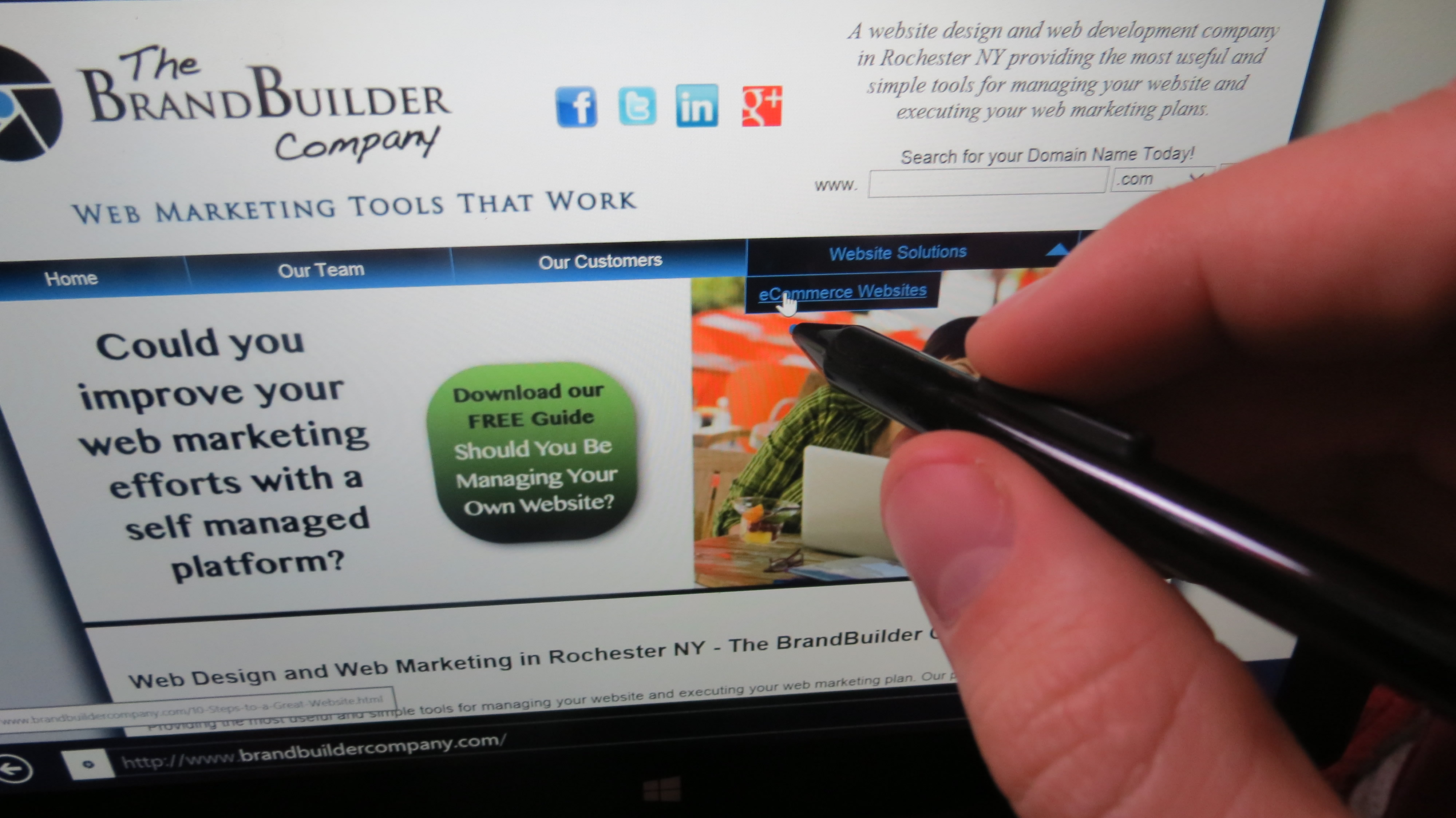 Example of the Surface Pro’s stylus interacting with a web page an inch away from the screen.

Windows 8 supports apps that use digital ink. A good example of this would be the Reader app for reading PDF files. You can write on them with the stylus. Flip the stylus over and it will allow you to erase your writing.

The Surface Pro offers full HD display. It does so with a brightness that I have not experienced on any other tablet. It also comes with a Mini DisplayPort which allows you to connect the Surface Pro to HDMI or VGA screens. The Surface Pro allows you to duplicate your screen on a second screen, extend the screen, or only display content on one of the two screens. Finally Windows supports multiple monitors by default!

The Surface Pro comes with slots for USB 3.0 and MicroSD cards. This allows you add storage to the device to expand the Surface Pro beyond 64/128 GB.

The Surface Pro comes with Internet Explorer 10. IE10 functions very well on a tablet. Swipe from left to right and it takes you back to your previous page. Swipe from right to left and it will take you to the next page if you are on a page that has an obvious continuation like on a search engine or a category page on a blog.

I know most people will not care, but I feel the need to add that the packaging for the Surface Pro was the slickest I have ever seen for a product. It looks good, and it was very easy to open. It is just held together with tape that somehow was easy to remove yet did not seem like you could do so accidentally.

Surface Pro: The Dark Side

The hardware in the Surface Pro is more powerful than the RT edition. This lowers the battery life down to about 4 hours. On Reddit someone asked the Surface Pro hardware team why the covers did not work as secondary battery. Their response:

“That would require extending the design of the accessory spine to include some way to transfer higher current between the peripheral and the main battery. Which we did …”

This response was well received. I am think that a tablet should work like a laptop when you add a keyboard. I was ready to buy a Type Cover until I read this response. I am now waiting to see if Microsoft offers a keyboard that works as an extra battery.

Storage space is another issue. Windows 8 reserves 10 GB of storage space for recovery tools. Windows 8 Pro and built-in apps take up 22 GB. That takes up 50% of the cheaper, 64 GB Surface Pro. You can transfer the storage space for recovery tools to a 16 GB USB device to recover some of that space. This is useful for some, though you must keep that USB in a safe place. That device can only be used in the case when you need to recover from a catastrophic situation. Additionally, Microsoft Office 2013 is one of the built-in apps taking up 1.7 GB. If you are never going to use Office you can uninstall it and recover that space.

Something I noticed was that Google really does not seem to want to present a pleasant experience on the Surface Pro or Windows 8. Between Internet Explorer 10, Chrome, and Firefox it was Chrome that felt the most clunky. It works, but things just don’t feel optimized. When it is the default web browser all live tiles for pinned websites have their icons replaced with the default IE logo. This wasn’t a problem with Firefox.

Additionally, Google has discontinued support for Google Sync in favor of CalDav and CardDav. This prevents Gmail users (and continued users of the defunct free Google Apps service) from adding their contacts or calendars from the Mail app. Leave those options unchecked and you can add those accounts to the Mail app. You can add Gmail contacts through the People app, but I have not managed to connect my free Google App account. Neither of my Google accounts seem to work with the Calendar app. Microsoft has confirmed that CalDav and CardDav is coming to Windows Phone 8. One would assume that it will come to Windows 8. To me it is bad that Microsoft does not already have support for CalDav and CardDav, and that Google would leave Windows 8/Phone users out in the cold like this.

Beyond that, the lack of an optimized live tile for Google websites just feels lazy on Google’s part. It’s two <meta> tags that let you specify the default color and the image used for the tile. Without those tags Windows will pull the small 32×32 favicon for a site, and pull a color from the icon. Compare the Facebook and Twitter live tiles to the Google+ live tile on the Windows 8 Start Screen image in this article. Google+ looks inferior. To make it worse, the dimensions for a live tile’s image are the same as home screen bookmark icons on a retina-quality iPad. This means that the image should already exist. For something so stupidly simple just add it to make prevent your brand from looking inferior to the competition.

Surface Pro: This, That, and The Other Thing

The first thing that tripped me up when I browsed the Windows Store was that there are no officials apps from Facebook or Twitter. Than it occurred to me that they’re just websites. You don’t need an official app for them like on Android tablets or the iPad.

I would recommend clipping the stylus to the charger when you are charging it. I have already left the stylus at home when I went out because I forgot to grab it after charging the device.

I spent absolutely no time setting up my printer. It automatically recognize I was on a network with an HP printer, set it up as my default printer, and included the HP Printer Control on the Start screen.

Overall I am very happy with the device. I love the stylus support. That being said, as a heavy Google user I cannot recommend it until the contacts/calendar issues are resolved. Furthermore, unless you’re really rich with money to burn I would wait a little while to see if they do come out with a keyboard that acts as a second battery.

This post was originally published as Surface Pro Review for The BrandBuilder Company.