It’s time into look to the future to make our 2013 predictions on mobile technology, social media networks, sports, and comic books. 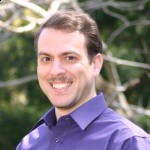 This post was originally published as 2013 Predictions for The BrandBuilder Company.